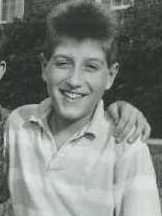 A few weeks ago, a friend of mine, PA Maglochlainn, died. PA fought to make the world a better place, and while he wasn’t old when he died, he wasn’t a young man either.

Today would have been Ryan White’s 41st birthday, but Ryan died in 1990, at the age of 18. Ryan was a haemophiliac, and he became HIV positive as a result of an infected blood treatment. He was diagnosed in December 1984, the same months as his 13th birthday. In the days before effective drug treatment, an HIV infection meant developing AIDS. He faced awful prejudice as a result; even though he posed no threat to his teachers or classmates he was not allowed to return to school.

A lesser man may have moved to another part of the country, where nobody knew him and he could live in secrecy. Ryan and his mother didn’t do that. They mounted a legal battle to allow him to go back to his school. As a result, he became widely known, appearing in the media, talking about his illness and his life. He put a human face on what was a shockingly anonymous disease. Even though he was ill, he fought the prejudice that he had faced.

Ryan, you were fighting for people living with HIV and their families at an age when most guys are still too young to shave. You fought for Michael, and you fought for me, and you didn’t even know us.

1 December 2012 was my third World AIDS Day in a serodiscordant relationship, and I think it has been my busiest. As I write this, I have just got home from collecting for Positive Life at the Grand Opera House in Belfast, which was a surprisingly extrovert thing for me to be doing.

If you are living with HIV there are still people who judge you. “I don’t know what you were doing when you caught it,” people say,”but it must have been something very stupid.” I’ve even encountered Christians who take that attitude, perhaps with the explicit assumption that if you are HIV positive it must be because of something dreadfully sinful that you did. What sayeth the scriptures?

Do you think that these people were worse sinners than other people because they suffered this way? Christ told us no. As it was for the Galileans whose blood was mingled with their sacrifices, as it was for those who the tower in Siloam fell, so for those living with HIV.

Because HIV can be sexually transmitted, there is a tendency for Christians to look down on people who are living with HIV, almost as though the HIV is a punishment for immorality. Someone who is HIV negative can then look down on someone who is HIV positive. Again, what sayeth the scriptures?

To some who were confident of their own righteousness and looked down on everyone else, Jesus told this parable: “Two men went up to the temple to pray, one a Pharisee and the other a tax collector. The Pharisee stood by himself and prayed: ‘God, I thank you that I am not like other people—robbers, evildoers, adulterers—or even like this tax collector. I fast twice a week and give a tenth of all I get.’

“But the tax collector stood at a distance. He would not even look up to heaven, but beat his breast and said, ‘God, have mercy on me, a sinner.’”–Luke 18.13

“But the tax collector stood at a distance. He would not even look up to heaven, but beat his breast and said, ‘God, have mercy on me, a sinner.’“I tell you that this man, rather than the other, went home justified before God. For all those who exalt themselves will be humbled, and those who humble themselves will be exalted.” (Luke 18.9-14, NIV)

When a Christian judges someone because they are living with HIV they are behaving exactly as the Pharisee did in this parable. ‘God, I thank you that I am not like other people—like those living with HIV’.

Living with HIV is not evidence of a sinful life. Just because one group of the population is more likely to be HIV positive than another group does not mean that it is morally inferior. If you think that it is, then you are behaving exactly like the Pharisee. As Christians, our attitude to those who are HIV positive should be exactly the same as our attitude to those with heart disease, diabetes, cancer, or any other long-term illness. We should treat everyone with the same Christ-like love.

I'm Andrew. Belfast born, Cambridge educated, working in Dublin. Married to Michael (also known as John). I earn my living by writing, mainly documentation, but I write fiction as well.